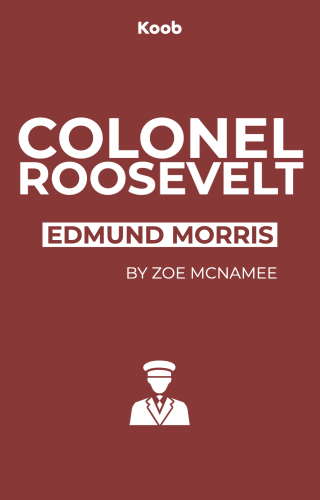 By reading this koob, you will learn how the frantic final decade of Theodore Roosevelt’s life—featuring politics, war, and a lot of dead animals—cemented his reputation as “the most interesting American.”

Theodore Roosevelt was propelled to power in 1901, when the serving president, William McKinley, was assassinated. He served two successful terms before stepping down in 1909. Roosevelt’s promotion of the “square deal,” insistence on transparency, and desire for fairness won him the support of many working-class Americans. Colonel Roosevelt is the third and final part of Edmund Morris’s gargantuan study of the life of America’s 26th president. Defeat, illness, and even an assassination attempt didn’t prevent Roosevelt from protecting his presidential legacy—had he not died in 1919, “Teddy” may well have served an unprecedented third term. Are you ready to discover what made the last years of Roosevelt’s life even more exciting than those of his presidency?