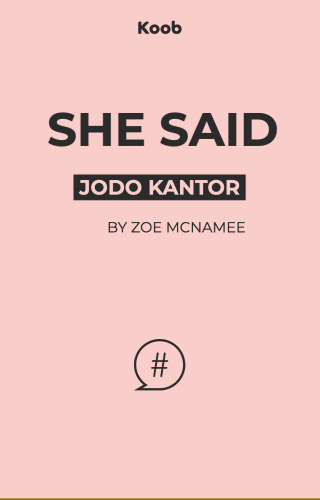 By reading this koob, you will learn how two New York Times journalists blew the lid on Harvey Weinstein’s decades-long career of sexual harassment of women in his employ.

Harvey Weinstein was a Hollywood titan. As the head of Miramax Films and, later, The Weinstein Company, he and his brother Bob were responsible for Oscar-winning movies such as Pulp Fiction, Shakespeare in Love, and The King’s Speech. Yet most people hadn’t heard of him until October 2017, when The New York Times published an article exposing Weinstein’s treatment of actresses and assistants at his company. Soon afterward, the #MeToo movement exploded on Twitter, with women from all walks of life sharing stories of harassment and abuse. So, how was Weinstein caught? How did he get away with his crimes for so long? And most importantly, what can such scandals teach us about power, money, and justice in the #MeToo era?