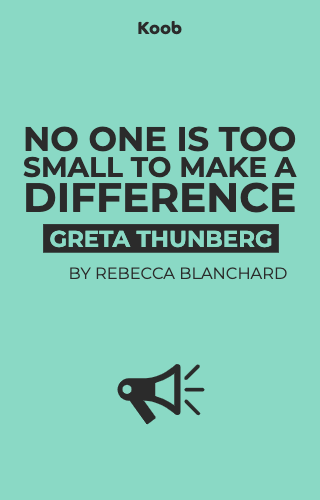 No One is Too Small to Make a Difference

By reading this koob, you’ll learn why teenager Greta Thunberg has devoted her life to grassroots environmental activism and what you can do in the fight against climate change.

Nominated for the Nobel Peace Prize, Greta Thunberg has achieved global fame as an outspoken environmental activist in the fight against climate change. In May 2018, after winning a writing competition about the environment, Thunberg was contacted by many environmental activists and youth seeking change. She wanted to start a school strike, but initially, her idea didn’t receive much support, so she decided to plan it herself. In August 2018, she launched a school strike outside of the Swedish Parliament, which laid the foundation for what would become a global movement. As global temperatures continue to rise, are we really facing the end of the world as we know it?