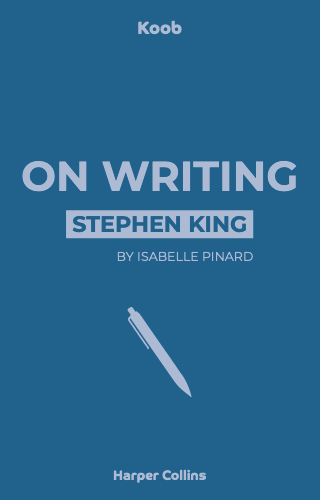 On Writing: A Memoir of the Craft

By reading this koob, you will discover Stephen King's advice to aspiring writers, shared with candor, humility, and humor.

You will also learn that:

In 1999, Stephen King was out on his usual afternoon walk near his Maine country home when he was hit by a van, catapulted 14 feet, and nearly killed. At the time, he was writing his memoir “On Writing” in which he reveals the ties that bind the act of writing to life—a life he nearly lost. He recovered physically thanks to the quick actions of a medical technician, and mentally through the power of his pen. A composite of memorabilia and literary insight, it’s the love for the craft, the honesty with which he addresses you, and in hindsight of his accident, his vital desire to transmit the knowledge and experience he’s gained that make Stephen King’s memoir invaluable to any writer. Not just because of what the author says, but because of how he says it. From the first page begins an intimate conversation with Stephen King. A conversation that’s best to have with a pen in hand, as not only does he teach you, he puts you to task.