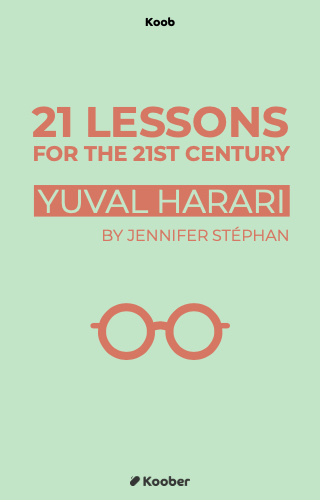 21 Lessons for the 21st Century

By reading this Koob, you will discover the technological, political and ideological factors that will shape the 21st century and the consequences these are likely to have.

-Artificial intelligence, Big Data and Blockchain are reshaping the economy and labour market,

-Despite its absence from most political discourse, ecological catastrophe is far more significant a threat than that posed by either terrorism or nuclear war,

-Liberal democracy has its limits,

-By exploiting the vulnerability of human desires and emotions, AI threatens to widen social inequality, and

-We must learn to overcome our fears in the face of the confusion and uncertainty triggered by the challenges of our time.

Through a global perspective, Yuval Noah Harari’s 21 lessons for the 21st century, examines the relationship between the forces at play in the here and now. He argues that the acceleration of technological innovation combined with an ongoing ecological catastrophe necessitates a fundamental rethink in how we perceive the world. Hahari suggests that the cause of the recent nationalist upsurge is in the failure of liberal democracies worldwide to disseminate a universal ideology. In turn, nation-states, religions and social networks have proved incapable of forming a global community. This leaves us in a difficult position if we are to avoid a future where our lives are taken over by algorithms. We must understand what role we have to play in this constantly evolving world.